A posting by RicoRacer Flux that is a human rights issue I wholeheartedly agree with.  Hope this reposting gives you something to think about as well as taking the time to click the link to learn more about supporting this campaign. 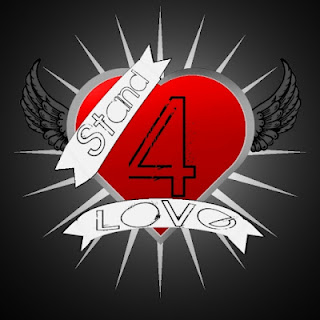 Each one of us has the right to liberty, justice and the pursuit of happiness. Everyone has the right to love and be loved in return. GAY, LESBIAN, STRAIGHT, TRANSGENDERED or BISEXUAL…..Sexual Orientation or Race shouldn’t Matter. The FREEDOM to LOVE is fundamental as the FREEDOM to BREATHE. Two adults should have the right to love without discrimination and intolerance. Marriage should be available to any loving couple. Let’s end hatred and discrimination now. Stand UP and be counted!!!

STAND4LOVE is an awareness charity project to promote the visibility and rights of Gay, Lesbian, Bisexual and Straight loving couples to have the right to marry and be recognized by the law across the world. It will be a picture campaign in Second Life to spread awareness and promote equality and tolerance. Each participant will take a picture of themselves in a plain white or black background then add the Stand4Love Logo. They will then put their message of support as well as their SL name and/or Title/Business (Optional) in the picture. All pictures received will be published here in this blog as well as CSLTM and UrWorld blogs. It will also be promoted in Stand4Love Facebook page and Flickr group. We will take the best pictures with the best message of support and put it in a Stand4Love book to be published in Second Life and Issuu. Please Join us.


Mission
Our goal is to spread awareness that two consenting adults should have the right to love and marry regardless of their race or sexual orientation. If we can open someone’s mind and promote tolerance and equality, then our goal has been achieved.


WHY WE ARE DOING THIS and WHAT IS THE POINT???
The fight for equal rights for the GLBT community has been a long struggle though each progress made has been a victory. Recently, Gays and Lesbians are NOW able to serve in the United States Armed Forces without being harassed or expelled as they had been for years. Can you even believe it that a United States President Obama supports Marriage Equality for everyone at the risk of losing his Presidential Re-election? I believe times are changing for the better and everyone is starting to realize that people should be granted basic human civil rights that most people just take for granted. The right to love and marry should be available to any adult couples in a loving relationship who just wants to build a life together. Why is this too much to ask?

There are still gay confused kids committing suicides all over the world because they are being harassed and bullied. Gay people are still being unfairly discriminated at their jobs and communities. They are being attacked and killed on the streets for being who they are. Some parts of the world, they are being jailed and persecuted by the government. WHY IS THIS STILL HAPPENING IN THE WORLD TODAY???

STAND4LOVE strongly supports Marriage Equality for everyone because people need to see that gays, lesbians, bisexuals, transgendered people are human beings too, who are capable to love and be in committed long term loving healthy relationships. I just think we all are human beings with the same heart wanting to love and be loved in return.
Labels: GLBT Human Rights Stand4Love