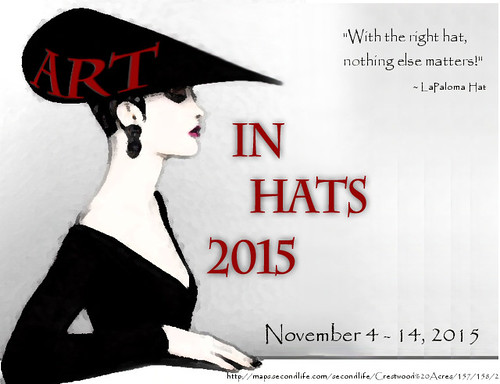 – WITH THE RIGHT HAT NOTHING ELSE MATTERS! –

ART in HATS and HATS in ART is back for another year of
fun, whimsy, artistic expression and entertainment!
There are contests open to the public with prizes, a variety of entertainment, more art and,
of course, the most exciting display of hats in Second Life collectively in one spot!

This year ART in HATS – HATS in ART has selected Team Diabetes of Second Life (http://teamdiabetesofsl.org/), an official charity of the American Diabetes Association,
as a charitable beneficiary of the event.  A portion of proceeds will go to the charity
and we will be holding a unique hat auction at the end of the event with exclusive designs!

The highlights of our schedule includes:

EXCLUSIVE PREVIEW HAT COSTUME PARTY
November 1, 2015 at 12 PM SLT
(This event is a private event, however, a limited number of tickets may be purchased.)


WHAT IS IT ABOUT?
Art and fashion meet in hats. Good hats are art to wear and subsequently many artists love to create fantastic hats. Fashion designers often show an explosion of creativity in hats. Hats turn to fashion with the styling. The basic idea of the exhibition is to bring designers, artists and photographers together in an art exhibition / sales event / charity benefit by presenting hats built by artists and fashion designers in combination with photos. The photos are meant to be an art shot. Hats and images are to be sold or are given as freebies. One of a kind pieces are sold in a live auction for charity.

ABOUT CONTESTS OPEN TO THE PUBLIC:
A photography contest will be held that allows the public to create a hat of their own and photograph it. The photographs will be submitted for display and a winner will be selected and announced at the closing events on the 14th. A styling competition opens the ability for anyone to style a look for a hat and show it to the public in a “all for fun” styling show! A winner will be chosen and announced during the after party!

WHEN IS THE EVENT?
Exhibition/Sale/Auction will be open from November the 4th through November the 14th. A private preview party will be held on the 1st of November, allowing opportunities for fans of the artistic offerings early entry and shopping privileges! See the website https://artinhats.com/ or contact Emma Portilo for information on this opportunity!
Labels: Art in Hats 2015